We're sorry but the candle you have selected is currenty in the process of being purchased or has just recently been purchased.

Please feel free to select another candle or check back in 15 minutes to see if the candle you have selected has been released for purchase.

We're sorry but there are no candles available for lighting.

You have already begun a candle purchase session. If you would like to continue with your current candle choice please click "Continue" otherwise please click "Select Another".

In the event that there is an error
in the information presented,
please contact the funeral
home by clicking here. 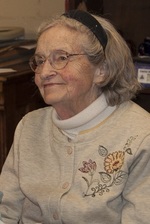 Genevieve was born Ellen Genevieve Sullivan on January 21, 1927, the daughter of the late Daniel Paul and Emma Gilbert Sullivan at their residence on Link Avenue.

She is the widow of Larry Bernard Brannon who predeceased her in 1991.

She and Larry were married in August 1949.

She was a member of the VFW Auxiliary and was awarded the Paul Harris Fellow by the Paris Rotary Club.

She was a member of Annunciation Catholic Church.

She thanks special caretakers Cathy Cassity and Trish Holman Hunter for their friendship and care over the last few years as well as the children of St. Mary School, her next door neighbors.

Mass of Christian Burial will be 11:00 a.m. Saturday, January 13, at the Catholic Church of the Annunciation with burial in Mount Olivet Cemetery. Visitation will be 5:00 to 8:00 p.m. Friday at Hinton-Turner Funeral Home. In lieu of flowers, memorials are requested to Patrick Brannon Memorial Dog Park or one’s favorite charity.


To send flowers to the family or plant a tree in memory of Ellen Genevieve Brannon (Sullivan), please visit our Heartfelt Sympathies Store.

This Book of Memories brings those affected by loss together by encouraging communication and self-expression. By giving friends and family a special place to tell their stories and express their feelings of loss, it helps them care for one another during a very difficult time. Click on any of the links to the right to access features or information within this memorial website.