To share your memory on the wall of Anna Link, sign in using one of the following options:

A private funeral service for immediate family only will be held at Hinton-Turner Funeral Home.

To send flowers to the family or plant a tree in memory of Anna B. Link (Wells), please visit our Heartfelt Sympathies Store.

Receive notifications about information and event scheduling for Anna

We encourage you to share your most beloved memories of Anna here, so that the family and other loved ones can always see it. You can upload cherished photographs, or share your favorite stories, and can even comment on those shared by others.

Posted Mar 27, 2020 at 07:31pm
i worked with Anna at the TB hospital in the 1970's. And discovered during that time that she grew up knowing my in-laws and many of my husband's family. i enjoyed times later when I would bump into her when i was back in Paris. She was always in great spirits and cheerful. She was a pleasure to know. my sincere sympathy to all the family,
Comment Share
Share via:
CL 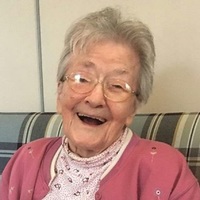