To share your memory on the wall of Dorothy Crockett, sign in using one of the following options:

Print
Dorothy Jean Spivey Crockett, 79, widow of Jessie Franklin (Frank) Crockett, Sr. entered into her heavenly home on February 12, 2020 at home with family by her side.

She was born on March 22, 1940 to the late Vernon and Addie (Pryor) Spi... Read More
Dorothy Jean Spivey Crockett, 79, widow of Jessie Franklin (Frank) Crockett, Sr. entered into her heavenly home on February 12, 2020 at home with family by her side.

She was born on March 22, 1940 to the late Vernon and Addie (Pryor) Spivey. Dorothy spent her adult years in sweet conversations in her hair studio which she based out of her home to better serve her family. During later years, she enjoyed time spent with her husband of 56 years watching UK Basketball or taking a day trip.

Funeral service will be held at Hinton Turner Funeral Home, 526 Pleasant Street, Paris, on Monday, February 17, 2020 at 11:00 a.m. with Don Menke officiating. Burial in Evergreen Memorial Gardens following the service.
Visitation will be held Sunday, February 16, 2020 from 5:00-8:00 p.m. at the funeral home.

To send flowers to the family or plant a tree in memory of Dorothy Jean Crockett (Spivey), please visit our Heartfelt Sympathies Store.

Receive notifications about information and event scheduling for Dorothy

We encourage you to share your most beloved memories of Dorothy here, so that the family and other loved ones can always see it. You can upload cherished photographs, or share your favorite stories, and can even comment on those shared by others.

Posted Feb 17, 2020 at 04:22pm
Remember our days of riding the school bus together. we sang and told stories and exchanged her biscuits and jam for my peanut butter and jelly sandwich. Will always have great memories of her and family. So sorry we have lost her,love Janice
Geis
Comment Share
Share via:
LL

Posted Feb 13, 2020 at 05:04pm
Jessie,Steven,& Robert and family
Marsha and family
I am so sorry to hear about your mother,grandmother and sister, I want you to know my heart and love go out to each one of you.
She was a blessed woman. I have so many fond memories of her as a kid and as a young woman I remember watching her in the salon through the phone hole cleaning the salon for her. She was the only hairdresser I have ever had as a kid
I love her jam cake with carmel icing I would always pray she made one when we were coming there.
She is now with the love of her life he is most happy now
love and prayers
Liz Crockett Lowe
Comment Share
Share via: 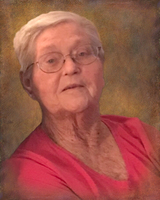