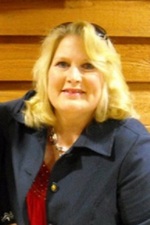 Terry Lynn Pridemore Lawson, wife of Lorne Lawson, departed this life on Wednesday, September 18, 2019, at the University of Kentucky Medical Center, after an extended illness, having attained the age of 56. She was born in Paris, Kentucky on March 2, 1963, the daughter of the late Phillip Jacoby Pridemore and Anna Belle Planck Pridemore, who survives. She was a 1981 graduate of Bourbon County High School and was retired. She had worked as a Ward Clerk Supervisor with the V.A. Medical Center and receptionist at the Paris-Bourbon County YMCA. Besides her father, she was preceded in death by a great nephew, Elliott Windley.

The family wishes to express a special appreciation to the staff of DaVita Dialysis Center and all of Terry’s caregivers.