To share your memory on the wall of Helen Canada, sign in using one of the following options:

The funeral service for Helen Washburn Canada will be on Monday, September 23, 2019 at 1:00 p.m. at Hinton-Turner Funeral Home officiated by Dr. Henry M. Hanna. A private interment will follow with casket bearers being: James Caywood, Clint Caywood, Nicolas Cabrini and honorary bearer, Sid Tate. Visitation will begin at 10:00 a.m., on Monday, until time for the service.

To send flowers to the family or plant a tree in memory of Helen Canada (Washburn), please visit our Heartfelt Sympathies Store.

Donations are being accepted for: MARKEY CANCER FOUNDATION INC.

We encourage you to share your most beloved memories of Helen here, so that the family and other loved ones can always see it. You can upload cherished photographs, or share your favorite stories, and can even comment on those shared by others.

Julie, Mike, Sheri, and Ashley sent flowers to the family of Helen Canada (Washburn).
Show you care by sending flowers 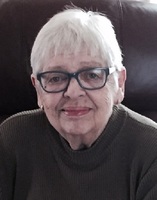