To share your memory on the wall of Jasper Chambers, sign in using one of the following options:

The funeral service for Jasper Clay “J.C.” Chambers will be on Friday, September 27, 2019, at 11:00 a.m. at Hinton-Turner Funeral Home. Interment will follow in Evergreen Memory Gardens with casket bearers being, Kerry Chambers, Todd Chambers, Bob Marini, Steve Parks, and Earl Jones. Visitation will be on Thursday, September 26, 2019, between the hours of 5:00 p.m. and 8:00 p.m. at Hinton-Turner Funeral Home. www.hintonturner.com
Read Less

To send flowers to the family or plant a tree in memory of Jasper Clay "J.C. " Chambers, please visit our Heartfelt Sympathies Store.

Receive notifications about information and event scheduling for Jasper

We encourage you to share your most beloved memories of Jasper here, so that the family and other loved ones can always see it. You can upload cherished photographs, or share your favorite stories, and can even comment on those shared by others.

With love, Kristie, Michael, Cara and Greg and John Adkins and Lee Weber sent flowers to the family of Jasper Clay "J.C. " Chambers.
Show you care by sending flowers

Blooming Garden Basket was purchased for the family of Jasper Chambers. Send Flowers

Flowers were purchased for the family of Jasper Chambers. Send Flowers

Posted Sep 25, 2019 at 11:23am
Sandy and Family,
We are so very sorry for your loss of J.C.. .Thoughts and prayers go out for each of you and may God give you comfort and peace now and in days to come.
Sincerely, Betty Long & Family
Comment Share
Share via: 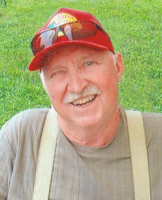